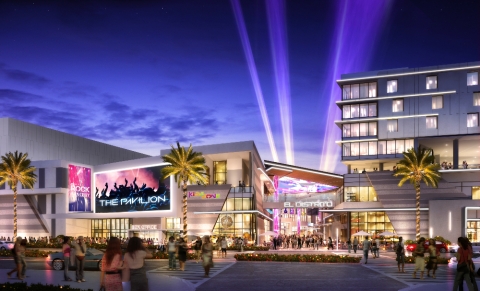 Deadly earthquakes have been rattling the island of Puerto Rico in recent weeks, causing devastation in the area around Guanica on the southwest coast. On the other side of the island, however, in San Juan (which is celebrating its 500th anniversary this year!), things are looking up.

After experiencing a decline in meetings and events business leading up to and following Hurricane Maria in 2017, the northeast portion of Puerto Rico is not only open for business, but well-positioned to attract more meetings and events than ever — especially in the luxury segment.

The 5-acre El Distrito, a major new entertainment complex, is set to be Puerto Rico’s crown jewel for the MICE market. Opening in stages throughout 2020, El Distrito’s centerpiece for events is the Coca-Cola Music Hall, an immersive, multi-sensory experience that’s unlike anything else in the Caribbean.

The three-level, 129,000-square-foot facility, which is slated to debut in March, will have a seating capacity of 4,000. It will feature a top-of-the-line audiovisual setup and acoustics (included in the rental fee), plus modern suites, dressing rooms, Wi-Fi and more. The music hall will play host to major concerts and performances when not in use for private events.

Coca-Cola Music Hall will be connected to other facilities and entertainment options within El Distrito including a 177-room Aloft hotel, a 50,000-sq.-ft. plaza with a digital scenery system, an urban zipline that incorporates augmented reality, a day-to-night disco, and multiple restaurants, bars and lounges. The complex will combine the best in art, music, technology and hospitality to create a destination perfect for events.

And the island's luxury scene goes beyond El Distrito, too. Brad Dean, CEO of Discover Puerto Rico, touts the island’s portfolio of upscale properties as among the best in the Caribbean.

For example, the 110-room Dorado Beach, a Ritz-Carlton Reserve — one of only four properties of its kind in the world — was rebuilt and reopened in October 2018 following devastation from Hurricane Maria. The ultra-luxurious property bestows ultimate service upon every event guest and also incorporates Puerto Rican culture into group activities. For example, a popular way to welcome groups is through the coconut cart. Staff select fresh coconuts and prepare them (adding rum is optional) for each guest as they arrive. Event planners can also choose from other entertainment options like Puerto Rican dancers, cigar rolling and mojito-making contests. Groups seeking ultimate privacy can do a buyout of the entire 50-acre estate, including the five-bedroom Su Casa villa.

The St. Regis Bahia Beach Resort is another top-of-the-line luxury property. It, too, reopened post-hurricane in late 2018 following a $60 million renovation that included a new spa and an oceanfront golf course. Nestled in the island’s El Yunque rainforest and adjacent to the Espiritu Santo River, the 139-room property is uniquely positioned to facilitate sustainable teambuilding activities with its on-site green team.

A destination for royalty, celebrities and socialites for a century, Condado Vanderbilt remains the classic, luxurious property it has always been. Exquisite meeting rooms here drip in lavish décor and colors that reflect the vibrance of the island, with the opulent Patio del Fauno Ballroom as the property’s piece de resistance. It accommodates up to 600 guests and has floor-to-ceiling windows overlooking the ocean. When it comes to dining, the fantastic catering menu includes interactive stations for crudo, sushi, paella and more.

Fairmont El San Juan Hotel completed a significant restoration of its ornamental lobby, oceanfront villas and 388 rooms in late 2018 (formerly known as El San Juan Hotel, it became a Fairmont in January 2020). Recently, it has hosted groups such as L'Oréal within its expansive meeting space, totaling 40,000 square feet indoors plus 19,000 sq. ft. of outdoor space.

Have you hosted a luxury event in Puerto Rico, or are you considering it this year? Tell us more on Twitter, @CorpEventNews.