Create a Spontaneous Think Tank with a Haute Dokimazo Takeover 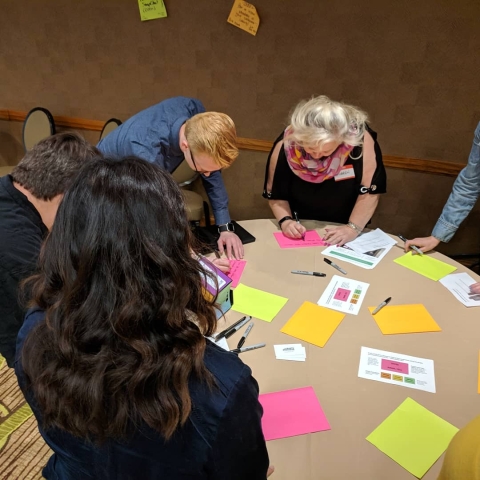 Last October, I wrote about Haute Dokimazo, the unconference for event marketing industry professionals.  Since writing about the Haute Dokimazo events, I’ve wanted to experience one for myself. I got my chance at the ILEA Live conference in Aug. 2018, with a “Haute Dokimazo Solutions Marketplace” workshop.

The concept of the “unconference” isn’t new. What is different is the way that the team behind Haute Dokimazo delivers it. They describe it as a vibe, a feeling, a culture — but I chalk a lot of it up to the founders’ high energy and infectious spirit of fun.

Within the past year, two of the three co-founders, Liz Lathan and Nicole Osibodu, have gone all-in, leaving their previous jobs to found Haute Rock Creative with Jeff Haynes, co-founder of Merch Revolution LLC. Haute Rock Creative is a full-service marketing agency that is the brand powering both Haute Dokimazo and Corporate Event Marketer, which offers training designed to help corporate event marketers become more strategic.

Lathan says that Haute Rock Creative was a result of popular demand.

“Our Haute Dokimazo events became popular amongst our attendees and they asked us to bring the format to their events,” she said. “We couldn’t do this with “real jobs,” and being acquired by Jeff allowed us to continue our passion, while also supporting additional clients with creative & event needs.”

The team is now taking their ideas to the next level, marketing the ability for companies to hire the team to bring the Haute Dokimazo experience, or “HDx”, to a portion of their conference — or to create new events for their customers or internal teams. The workshop at ILEA Live was an HDx, or a taste of what companies could expect from such an experience.

ILEA Live didn’t do much promotion around the workshop, but Osibodu and Lathan didn’t let that stop them, using their expansive personalities and cat-wrangling skills to recruit attendance through networking during any opportunity they could find. The results weren’t too shabby: while not a huge turnout, there were enough people to form four breakout groups.

Lathan says that approximately 100 participants is the ideal size for a Haute Dokimazo Signature event or an HD takeover, but notes that the team can also facilitate connections and conversations for groups with as few as 20 people.

Osibodu, who is known for doling out free hugs, explained that Haute Dokimazo breaks down the “walls of loneliness” felt when individuals walk into a room filled with people they don’t know.

To start off the three-and-a-half hour session at ILEA Live, small groups were formed with icebreaker activities designed to help participants share information and build one-to-one relationships. This model works particularly well for groups with introverts, helping to encourage participation in a way that is neither overwhelming nor off-putting.

Attendees were instructed to think of a business problem they were facing that they would like to work through with peers, and also of areas where they had expertise or knowledge they would be willing to share. After writing these ideas down individually on sticky notes that were posted on a wall, participants were asked to mark the ideas that were most appealing to them.

The Haute Dokimazo leaders then grouped the top-rated ideas into loose tracks of breakout sessions and, using the volunteer data, assigned willing facilitators from among the participants. The sessions were conducted in a loose roundtable format, ensuring that everyone had a chance to participate but was not forced to do so.

“The beauty of the unconference format is that participants talk about what they want to cover, and can choose how much they want to listen versus contribute,” Lathan explained.

She added, “Everyone has the opportunity to lead or participate in the sessions. No one has to prepare a presentation, just bring their brain.”

Attendees were encouraged to jump from one session to another if they so desired (which sparked some conversation and debate around whether that was valuable or distracting…with the decision that both were true). The leaders kept their eyes on all the sessions, checking to make sure all was going well and encouraging communication.

I chose to attend sessions on time-management and creative visual thinking, both of which proved to be extremely useful. It quickly became apparent that there were common pain points among our small groups, and individuals who had some very helpful advice and solution suggestions to share.

What works so well with this format is that attendees are encouraged to talk about the things that are most important and most pressing to them. It also fosters relationship building, as deeper connections are made through participants sharing ideas and information amongst each other. I left feeling like I built some connections that could easily turn into new friendships and/or business relationships.

“It’s hard to describe, but ‘Hauties’ (as we call them after they have come to an event) share an emotional bond that starts in the first 10 minutes and lasts beyond the session – many times turning into real friendships,” Lathan said. “That’s why we call our Hauties family!”

When asked whether the Haute Dokimazo workshop met expectations, it became clear that to many, “unconference” had a negative connotation that the event itself belied. One attendee summed it up best as a “spontaneous think tank” — a place where sparks fly, creativity is encouraged, ideas are generated and change is embraced to make strides towards success.

Interested in bringing Haute Dokimazo to your next event? Go here for details.

The next Haute Dokimazo conference will be held Nov. 11-13 in Las Vegas, Nevada. It is by invitation only, to ensure an even ratio of suppliers to planners. Applications for invitations are currently being accepted. If you can’t make it to Las Vegas, keep an eye out for the New York City event which will be held Jan. 27-29, 2019.

5 Ways to Promote Sponsor and Exhibitor Booths at Virtual Events
Imagine if sponsors and exhibitors kept returning to participate at your events. Isn't that every event planner's dream? This is possible! All you need is to identify the outcomes a sponsor or exhibitor wants and help them reach their goals through a consistent approach. Getting visibility and generating sales/leads are two common event goals sponsors and exhibitors have. Below are five ways to help them achieve these goals.
Learn More