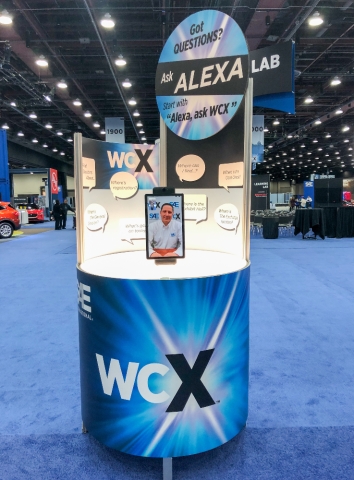 “Hey Alexa, what’s next in new technologies designed to support the exhibition industry?”

That’s the question Freeman poses in its winning submission for the annual UFI Digital Innovation Award. The award, which recognizes new technologies designed to support the exhibition industry, was captured by Freeman for its artificial intelligence-powered chatbot services.

“Innovation comes from a lot of different places,” says Wilson Tang, who was recently promoted to the role of vice president of innovation for Freeman. The idea for an Amazon Alexa-powered event chat activation originated with a Freeman client, who asked the brand experience company to explore the possibilities.

“We thought that this would be a great way for us to start looking into AI in a concerted way,” Tang explained. “AI is not a piece of technology that you can buy off the shelf. It's a way of building new computing software with broad applications, and it’s going to have dramatic effects on how we operate our businesses and the economy at large.”

This thought, combined with the client’s request, propelled Freeman to create a prototype chatbot that was used for The American Society of Hematology’s annual meeting in 2017. Twelve Alexa stations were placed throughout Georgia World Congress Center as an extension to the conference help desk, allowing 25,000 attendees to ask event- and venue-related questions such as “When is Dr. Holland speaking?” and get immediate answers.

On-site, attendees asked more than 100 questions per hour, on average. Some 6,000 data points were collected from 6,000 questions.

Since that time, Freeman has developed customized AI-powered chatbots (and other AI-driven event offerings, such as data visualization, geofencing, indoor maps and session seating capacity) that can be scaled for any size event in any industry. Tang says they have been working with a few dozen clients to continuously test and improve the chatbots. Currently, the solutions work across multiple channels including the web, integration with mobile apps, SMS, Alexa and more — and according to Tang, the ability for client-side integration is not far behind.

Tang says one unexpected benefit of the technology, that’s perhaps the most interesting, is the ability to uncover information gaps. The most asked question at any event is always, “Where’s the bathroom?” he says, but often there are other questions for which the show organizer never planned. This could be an attendee asking about a session or category of education that isn’t offered, or a type of product not represented by any of the show’s exhibitors.

“Those are the things that event organizers end up being most excited to learn,” Tang says, “and there have been many instances where they said, ‘We did not even know that our audiences were interested in this.’”

Chatbots aren’t limited to the physical event. They can be used throughout the year and throughout the event lifecycle. Freeman works with event organizers to understand their event goals and attendee needs to customize their event technology. And according to Tang, this is a key differentiator. Because the chatbot solution is designed specifically for the meetings and events industry, a lot of programming has already been done.

“We spent a lot of time and effort making sure that it understands the language of attendees, exhibitors, show organizers and meeting planners,” Tang says.

Right now, Freeman suggests allowing a minimum of four months pre-event to create a customized chatbot product. However, Tang envisions this timeframe getting progressively shorter as the technology becomes more advanced. He also says the ability for brands to connect with their audiences year-round will eventually displace the one-off event usage.

“A lot of trade shows or associations have a mission to interact and engage and promote their industry. We're trying to shift away from saying, ‘Hey, add a chatbot to your event,’ — it's more about adding a chatbot so that you can have a conversation with your attendees all year long,” says Tang.

Tang also advocates for event organizers to create interactive moments with their communities, attendees or membership. An example might be a medical association teaching people about hematology, or a software company teaching customers about big data (or, about its products). Or, an organization providing information on where and how people can connect during all the other days of the year in addition to at the event, perhaps in an online community or at user group meetings.

“It's going to be a Star Trek-like future,” Tang predicts. “We're going to be talking to our technology [and] interacting with it in a natural way.”