Atlantic City has a long and rich history. The New Jersey city has been the home of the Miss America pageant since 1921, and its five-mile boardwalk, first constructed in 1890, is the oldest in the country and the longest in the world.

Best known for its casinos, boardwalk and beach, the city also has much to offer in the way of teambuilding activities. From morning yoga on the beach to a spa experience, waterfront cruise, beer pairings or chocolate making, there are plenty of options to suit any group’s needs.

Music, Pampering and Dining at the Hard Rock Hotel

My window at the Hard Rock Hotel & Casino Atlantic City looked out over Steel Pier, the city’s oldest theme park that extends 1,000 feet from the boardwalk over the ocean. Its Observation Wheel, which lights up in changing colors at night, has become an iconic landmark that offers views over the city and the shore. 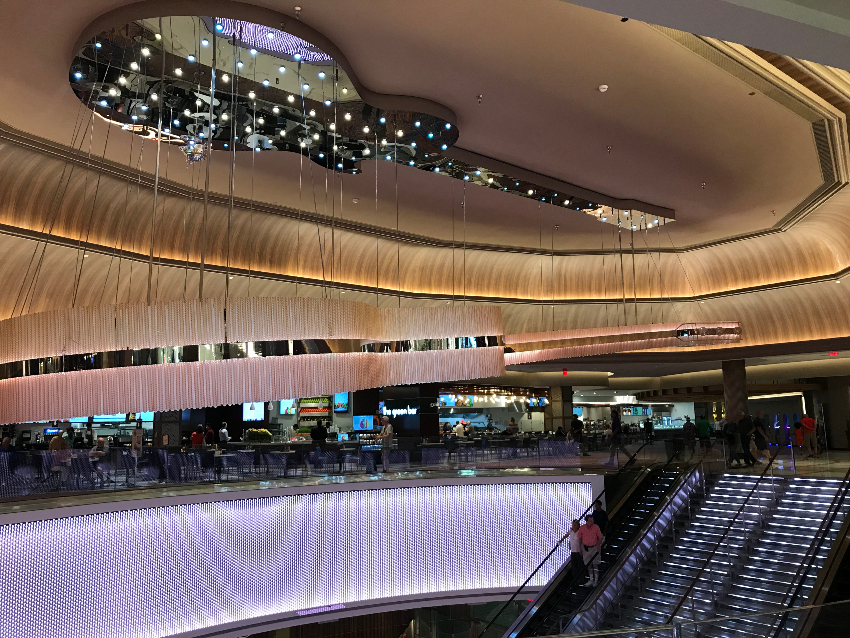 The Hard Rock Hotel and Casino Atlantic City has more than 150,000 square feet of meeting and event space, and nearly 2,000 guest rooms to hold meeting attendees. Hard Rock Live at Etess Arena can host general sessions of 7,000 people or more than 300-booth trade shows and expo events, as well as music performances.

Music is of course a key component of the Hard Rock brand, and you’ll find it showcased throughout the property. Guests can request a record player and LPs delivered to their rooms for the duration of their stay, and music memorabilia is everywhere, including one of Bob Dylan’s guitars, Elvis’ Rolls Royce, a glittering glove from Michael Jackson and clothing that adorned stars such as Lady Gaga and Taylor Swift. 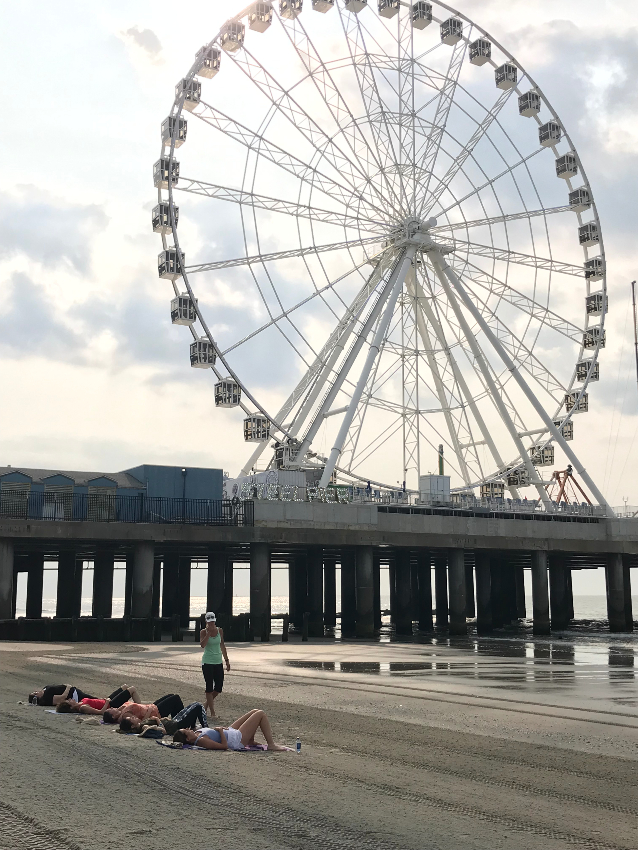 Vibe manager Adam Zengel curates 38 different playlists that are specially designed for different areas within the resort. Groups can work with Zengel to build custom playlists for their events, or can work with the Hard Rock to book one or more of the many local musicians or bands who often perform on the property.

Even the spa features music. Guests can listen to their choice of tunes on headphones while sipping complimentary champagne during salon appointments, and specialty spa treatments include the Rhythm & Motion massage, which incorporates music and vibration. The Rock Spa & Salon at the Hard Rock Atlantic City offers 31 treatment rooms, a salon, pool, hot tub, steam and sauna.

Want a special group experience that will help give attendees some spiritual energy? Our group started off the day with our own yoga session on the beach in front of the Hard Rock Beach Bar, right across the boardwalk from the hotel.

The Hard Rock Hotel and Casino Atlantic City has a wide variety of casual and fine dining restaurants as well as a food court. I tried a delicious half-size Philly cheese steak from White House Subs that was so large it could have fed me for three meals. Also memorable was Kuro, a Japanese restaurant where groups are encouraged to try “menu mapping.” You tell the waiter what you like and don’t like, and the chef sends out selections based on your taste preferences.

The game of Monopoly as we know it today (it was based on an older game) was invented in Atlantic City and features the city’s streets and landmarks. Located in the new and upcoming Orange Loop — the three blocks encompass Tennessee Ave., St. James Place and New York Ave. — is Tennessee Avenue Beer Hall. The restaurant, which opened in late 2018, features a rotating choice of 40 beers on tap and more than 60 more in bottles. The soft pretzels with warm beer cheese sauce are a must-have, and the Kentucky Avenue chicken sandwich with Japanese pepper-spiced chicken, kimchi and sweet chili aioli is outstanding. 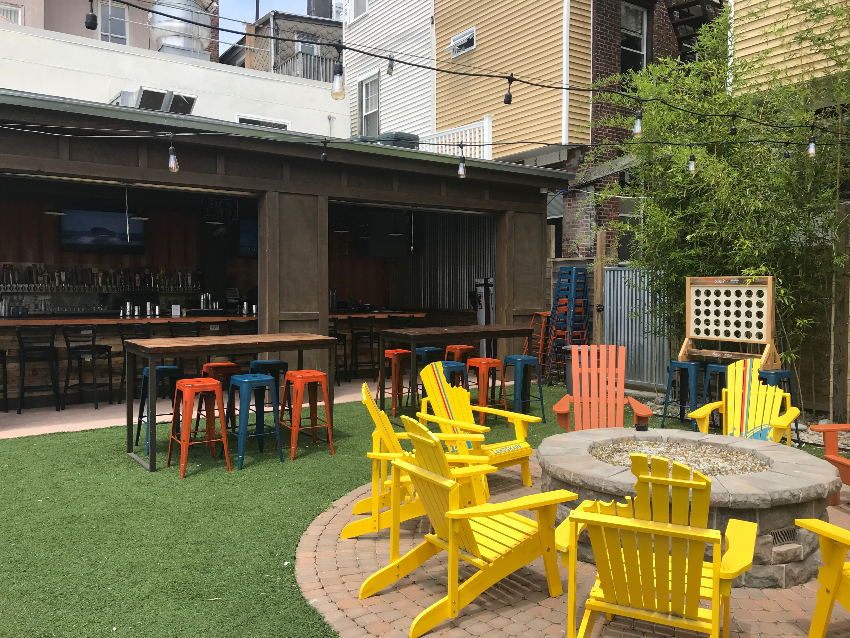 Tennessee Avenue Beer Hall also features an outdoor patio with a bar and games that  would be perfect for a group outing. In the summer, free classic movies are shown and live bands play Saturday, Sunday and Monday nights.

During our visit, builders and decorators were putting the final touches on new dining and live music venue Rhythm & Spirits, which opened its doors in late July.

Just a couple of doors down from the beer hall is MADE Atlantic City Chocolate Bar, where visitors can buy homemade chocolate and enjoy craft cocktails. Owners Mark and Deb Pellegrino (if you’re a fan of the Food Network Challenge you may recognize Deb’s name — she won in 2011 with a creative chocolate kraken) make the chocolate on-premises, but plan to move production to another facility to support business growth. MADE AC has only been open for a little over a year, but the couple has already sold more than 200,000 chocolate bars. 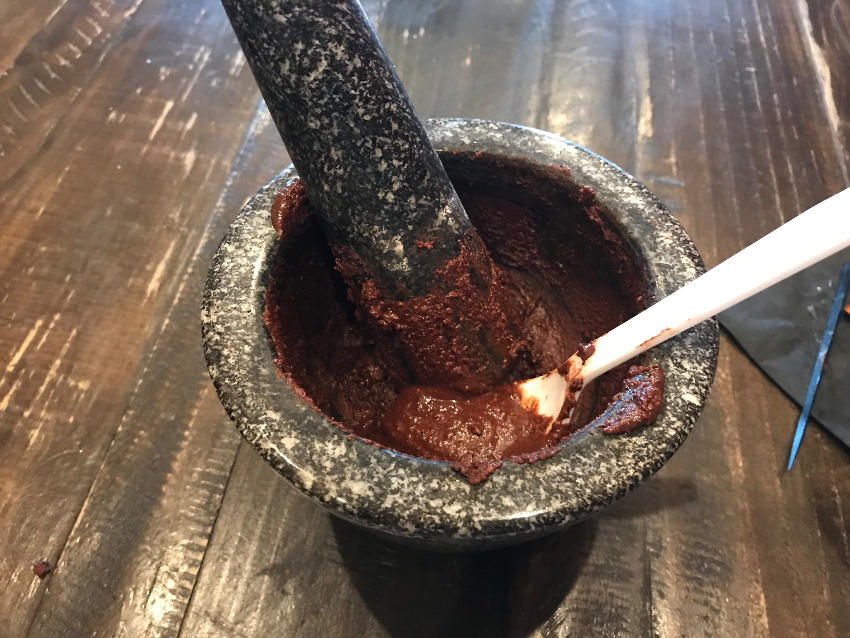 Groups of any size can order chocolate bars with customized stickers, and small groups can book a chocolate experience. In the latter, the Pellegrinos explain how chocolate is made, allows participants to hand-grind a cacao bean using a mortar and pestle, and show how each piece of equipment works. And of course, you get to enjoy both the chocolate and the cocktails!

The Atlantic City location of Ripley’s Believe It or Not is also located in the Orange Loop, and is available for group tours and event buyouts.

Just under a mile away is Little Water Distillery, the first legal craft distillery in Atlantic City. Groups can book a tasting and a tour, learn the history of distilling in Atlantic City (hint: the city wasn’t big on following Prohibition laws) and try some fresh-made cocktails using ingredients grown right outside the building.

When you’re in an oceanfront city, it’s natural to want to see what it looks like from the water. Atlantic City Cruises takes visitors out on the water for one-hour or two-hour cruises from Historic Gardner’s Basin. While there is a dedicated Dolphin Tour, our group saw several dolphins and some manta rays, along with learning more about the history of the city and its shoreline, during a one-hour Morning Skyline cruise. Groups of up to 100 can reserve a boat for a private cruise.

If you’re planning a morning cruise, you can grab breakfast at Gilchrist next door and try the famous New Jersey pork roll, also known as Taylor ham. Or, have lunch or dinner and a beer or two at the Back Bay Ale House. Historic Gardner’s Basin is also the home of the Atlantic City Aquarium, which can host meetings and after-hours special events.

Depending on where you’re coming from, there are various options for getting to and around Atlantic City. Atlantic City International Airport (ACY) is just a 12-minute drive from downtown, and Philadelphia (PHL) is just over an hour’s drive. Amtrak and New Jersey Transit also offer rail service.

Within Atlantic City, jitney service is an easy way to get around. “Jitney” was slang for a nickel, and that’s how much it used to cost to ride these small buses. Today the cost is a little higher, but at $2.25 a ride, it’s still very affordable. AC Jitney Association has service from the rail terminal as well as downtown. Jitneys run on a regular route, but groups can also book 13- or 24-seat buses for private and event use.

If you want to ride in comfort, Joe’s Limousine Service is a family-owned business that has operated since 1967. My driver, Frank, acted as an unofficial tour guide during the rides to and from PHL. That’s how I knew to try White House Subs, learned the origin of the jitney, and discovered that I might be considered a “shoobie,” a term that originated back in the days when out-of-towners who wanted to escape the heat of the city would take the trains down to Atlantic City, carrying their packed lunches in shoeboxes.