How are enterprise marketing professionals adjusting their 2020 plans in response to the spread of coronavirus? Just-released research shows that while live events are off the table for now, marketing teams (including event marketers) will remain active.

That's one key high-level takeaway from the new report How COVID-19 is Impacting B2B Marketing from B2B Marketing Zone. Overall, per the report, 61% of respondents anticipate their overall marketing budgets are likely to be cut. 39% plan to reallocate event marketing budgets to other tactics, with additional content creation topping the list.

Those figures are based on the 456 total responses from B2B marketers in a variety of industry segments and companies of all sizes. But what about enterprise marketing professionals specifically? 86 respondents are in companies with 1,000 or more employees. Here's how that group is changing plans in response to COVID-19.

At the beginning of 2020, event planners were optimistic about the growth outlook for this year. Three-quarters planned to spend 20% or more of their total budget on events, and more than half (53%) planned to spend at least 30%. 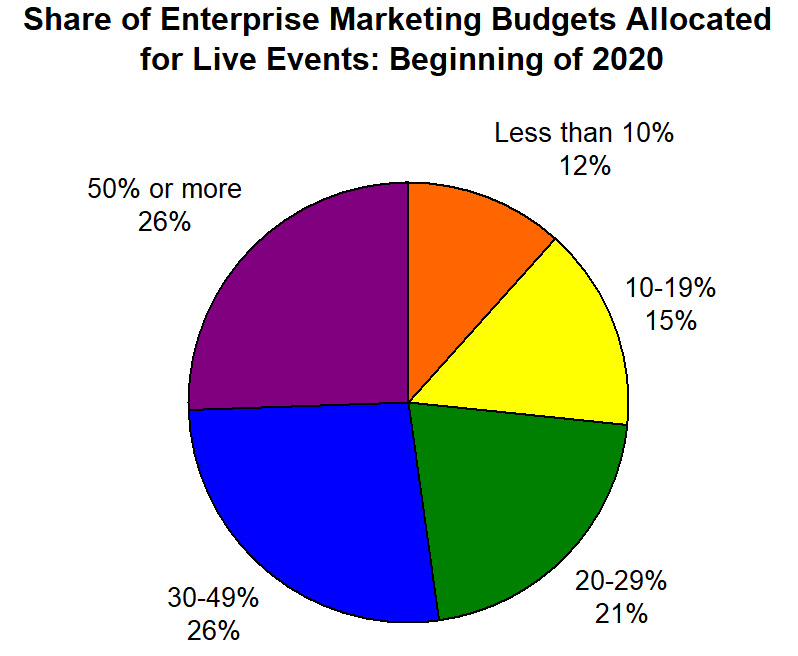 Per the B2B Marketing Zone study, they also planned for busy event calendars. Nearly two-thirds (65%) planned at least one event per month; 41% planned 21 or more events this year; and a quarter were slated to host, sponsor, or have a presence at 50 or more events in 2020.

How COVID-19 Has Impacted Enterprise Event Plans and Budgets

In early March, it became clear the pandemic was going to significantly alter event plans. On March 6,  the annual South by Southwest festival was cancelled. On March 10, the Coachella music festival was postponed, and a day later the NBA suspended its season.

And then on March 15, the U.S. Centers for Disease Control and Prevention recommended that no gatherings with 50 people or more be held in the United States for (at least) the next eight weeks.

When the B2B Marketing Zone survey was completed, near the end of March, 69% of B2B enterprise marketers said they planned to cancel all scheduled live events for the next two to six months.

However, 81% said they would replace some or most of those planned live gatherings with webinars or other virtual events. And nearly twice as many said they would either reallocate live event dollars or spend them on live events later in the year (56%) as said they would not spend the money and just cut their overall marketing budgets (29%).

How Enterprise Marketing Budgets Will be Reallocated

Respondents at large companies were significantly more likely than their peers in smaller firms to say they would shift funds to content marketing, online events and paid social media. They were less likely to move those dollars into SEO, outbound email, or direct (postal) mail efforts.

As the shutdown grinds on, economists are predicting a steeper second-quarter decline than initially thought. Major League Baseball is pondering a cancellation of the season, or possibly playing games in empty stadiums.

But there are glimmers of hope. It appears the worst may be behind us for hard-hit northeastern states. The nation's top doctor has suggested that parts of the country could start a “rolling reentry” as soon as May. And the two major political conventions are still scheduled for mid-August.

After enduring months of isolation — and webinars — consumers and business professionals will crave the face-to-face engagement of live events. It may be only a matter of months before enterprise marketers can start shifting some of their budget dollars back into live gatherings.