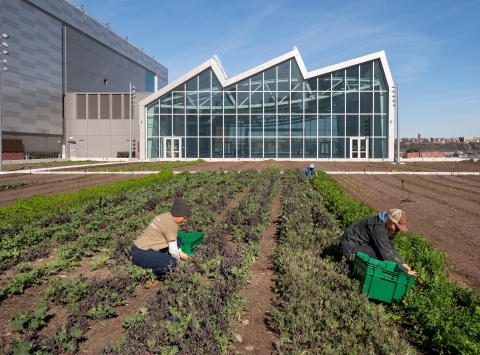 As the world celebrated Earth Day April 22, event professionals, organizations and venues took stock of the impact their carbon footprint has on climate change, implementing initiatives to be more sustainable. Following are three convention centers that unveiled green initiatives to mark Earth Week.

Each year, the farm is expected to generate up to 40,000 pounds of produce, which is being incorporated into the millions of meals served to guests during events at the convention center. During Earth Week, farmers from Brooklyn Grange, which manages the rooftop farm, harvested this year's first produce, including carrots, leeks and baby kale.

"As we celebrate Earth Week, it's important to reflect on our existential fight against climate change and continue our pursuit of historic, innovative solutions to bring us closer to a cleaner, greener New York State," said New York State Gov. Kathy Hochul in an announcement to the welcome the facility into the NYS Grown & Certified program. "From the success of its nearly seven-acre green roof to a new rooftop farm, the Javits Center has proven the power of sustainability.”

New York Convention Center Operating Corporation President Alan Steel expressed gratitude in being part of the NYS Grown & Certified Program and pride in bringing its roof-to-table experience to millions of visitors from around the world.

“The rooftop farm takes our sustainability program to the next level—literally—by providing guests with ingredients grown only steps from where they are consuming them,” Steel said. “Our goal is to continue serving as a model of sustainability and encourage others to consider the potential of urban farming and its positive impact on the community."

On the Javits Center's rooftop farm, farmers with Brooklyn Grange are planting a variety of crops, from basil and broccoli to tomatoes and turnips. They work closely with the convention center's on-site chefs to integrate the produce into meals created for specific events, from trade shows to black-tie galas.

To further its environmental commitment, the Javits Center also unveiled the creation of a food forest as part of its unique rooftop ecosystem. With seven distinct layers stacked vertically, a food forest mimics the ecological benefits and produce dynamics found in forests and is designed to increase the biodiversity, efficiency and sustainability of food production systems.

Planted in a 10,000-sq.-ft. rooftop orchard constructed as part of the recent expansion, the food forest will amplify the ecosystem services already supplied by the Javits Center's green roof and farm, including stormwater mitigation, thermal regulation and forage and habitat for area wildlife. The wide variety of plants will create a more complex and resilient space for growing food for humans and other species that rely on green infrastructure in the built environment. Since 2014, 35 bird species, five bat species and thousands of insects have been observed on the Javits Center's green roof, in addition to five active beehives.

Since 2014, the Javits Center has reduced its energy consumption by 26% and added a new three-story building with transformers, back-up generators and other electrical equipment to power the expanded convention center.

The Los Angeles Convention Center (LACC) announced a ban on single-use plastic bottles throughout the facility, pivoting to the use of aluminum bottles and partnering with the Los Angeles Department of Water & Power to promote the use of hydration stations.

“As an environmentally responsible facility, this was an obvious next step,” said Ellen Schwartz, general manager of the LACC. “The long-term cost of single-use plastic to our environment was something we could no longer ignore.”

"The LACC has been a leader in sustainability, not only with this effort but by installing the largest solar array on a municipally owned convention center in the U.S.,” Liu said, adding that she is grateful for Schwartz's leadership in making the LACC a model for sustainability.

In addition to reducing plastic pollution, the newly introduced aluminum bottles are easily refillable from one of the 21 hydration stations on-site. To date, the water refilling stations have saved an estimated 150,000 plastic bottles.

Recently, the LACC teamed up with the Los Angeles Department of Water & Power (LADWP) to more clearly identify the water refilling stations. “Fill Up Here” signs have been added to each hydration station to encourage guests to take advantage of the city’s clean and safe water supply.

LADWP is expanding access to clean, drinking water by supporting the installation or refurbishment of at least 200 drinking water stations citywide by the end of 2022 and beyond.

The New Orleans Ernest N. Morial Convention Center (NOENMCC) announced the completion of some of the largest energy-saving initiatives ever undertaken in the region. The ambitious energy efficiency upgrades, including an overhaul of the facility’s lighting and HVAC systems, are expected to save hundreds of thousands of dollars and millions of kilowatt hours, making the facility significantly more sustainable.

“Not only will these energy efficiency upgrades lessen the impact that the convention center has on the environment, they will also improve the experience our guests have when they visit the facility,” said Linda Baynham, director of sustainability at the NOENMCC. “These upgrades improve the client experience while reducing environmental cost. We will continue to pursue energy-saving opportunities that support our mission of delivering results for our internal and external customers."

Among several other initiatives, the NOENMCC completed the following energy efficiency projects:

Through these projects, the convention center awarded $11 million in contracts to small and emerging businesses in the community and participated in Energy Smart, a comprehensive energy efficiency program developed by Entergy and the New Orleans City Council.

Although much has been completed, there will be more improvements to come. The convention center is currently investigating electric vehicle charging stations and solar power options and plans to install a reflective roof to further reduce both energy use and the heat island effect, the significantly hotter temperatures common in urban areas as compared to surrounding rural landscapes.

“These issues are very real, and we are examining every detail of our facility and operations, as we continue our work to reduce the convention center’s carbon footprint,” said Michael J. Sawaya, president of the NOENMCC. “As a hub for the local community and visitors to our city, we are committed to making sustainability a focus of everything we do moving forward.”