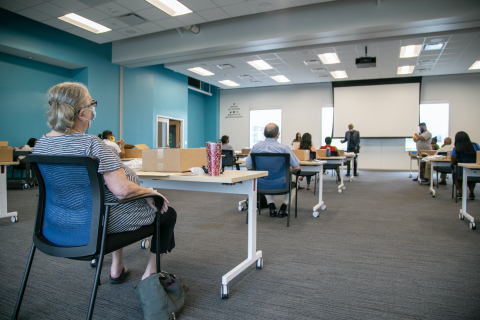 As the event industry slowly begins to creep back, smaller venues are particularly well-suited to host gatherings, as groups often have the entire space to themselves and can limit the number of people that attendees come into contact with. This was a fact that the U.S. Census Bureau event team took into consideration when rebooking several job training sessions that had previously been canceled because of COVID-19.

Anthony Thornton, Census field operations manager, first reached out to Quorum at the University City Science Center in Philadelphia in June. This newly expanded space, which now encompasses 15,000 square feet spread over two floors, features breakout rooms, soft seating pods and meeting facilities for up to 300 people. Thornton said he liked this venue because it was in a central location of the city that was accessible via car and public transportation, and was also spacious, modern and presented a comfortable place to meet and learn.

The Philadelphia Area Census Office (Franklin division) ended up booking their Onboarding and Equipment Distribution Orientation event at Quorum. For the event, they presented to 15 individuals hired as enumerators to work on the group quarters operation of the Decennial Census.

Lynette Moore, director of Quorum, says they were able to set up the largest room within the facility to allow each participant to have their own table and chair, spaced to accommodate social distancing. In addition, the room was set up with entry and exit points to minimize the risk of participants being too close to each other. In advance of the sessions, Quorum’s facilities team cleaned and sanitized all workspaces and surfaces, set up signs and arrows to assist with the flow of people, and had staff on-hand to ensure everyone was wearing a mask.

The building’s cleaning company also enhanced protocols by cleaning high-touch areas like door handles throughout the day along with their normal cleaning each night, adding a no-touch hand sanitizer station in the lobby, limiting the number of people on the elevator at a time and putting NanoSeptic self-cleaning handle wraps on doors.

Overall, the event took place safely and without a hitch. “It was pretty straightforward and went along efficiently,” says Thornton. “The management was very cognizant of our mutual concern for public safety [and] the facility takes cleanliness and sanitation in very high regard.”