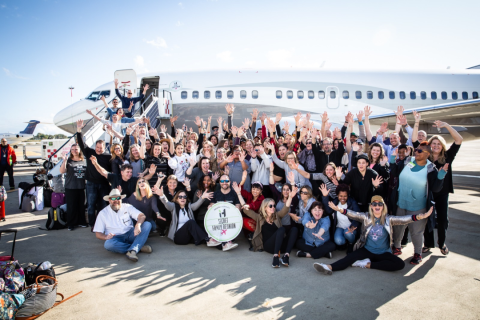 Haute Dokimazo held its first-ever Secret Family Reunion in November 2019, bringing together more than 80 senior event, marketing and business professionals for a conference unlike any other. In a private screening at the 2020 Sundance Film Festival this week, The Aperture Pill debuted a short documentary film chronicling the event.

For those who aren’t familiar with the event, here’s a recap.

Haute Dokimazo co-founders Nicole Osibodu, Liz Lathan and Tom Spano say that they were inspired to create an event that would show the possibilities inherent through human connection.

“We wanted to show the world that you could get business professionals to disconnect for a few days, make genuine human connections with perfect strangers, and solve business problems together.”

They also weren’t afraid to fail or change things on the fly — trying different things out to see what worked, and tweaking or discarding whatever didn’t.

The “secret” in Secret Family Reunion was the destination. Participants were instructed to pack for 65-degree weather, possible rain, and to bring a passport to JFK airport at 2 p.m. on Nov. 2, where the destination (Tuscany!) would be announced. Two hours later it was time to board the chartered plane.

SFR was a whirlwind of sessions, networking and activities. Crowdsourcing — the key component of any unconference — was held the morning after arrival. It was originally slated to happen on the plane, but between the layout, the excitement, and travelers’ need for sleep during the 12-hour overnight journey, the HD team changed the agenda.

Participants wrote all their ideas for content on sticky notes: topics they wanted to know more about, and topics on which they could share their expertise. Then, they voted for the final sessions, and those with expertise were selected to facilitate.

The session setup was a roundtable format, and attendees could go to whichever concurrent session piqued their interest. As all the sessions were in the same room, it was easy to move from one to another if your original choice didn’t match your expectations. People drew up chairs in loose circles, and everyone was encouraged to participate. (This format is great for introverts, who don’t want to be put on the spot but may have a lot to contribute.)

Topics ranged from event technology to lead tracking, marketing, storytelling, career development and even improv. There was a series of strategy sessions to help launch a new business. There was a special session for CEOs. In short, there was something for everyone, in a low-pressure environment that encouraged communication and collaboration.

The venue, Diacceroni Agristurismo Biologico, is about 45 minutes from Pisa. It’s an agricultural tourism destination, generally attracting guests for vacation getaways. Fittingly, Haute Dokimazo was the first group Diacceroni had ever hosted. This meant there were no preconceived notions or standards on how to run a meeting there, opening up even more creativity.

Our gracious hosts made everyone feel like family. A family that makes perfect pasta and pizza from scratch; hunts for truffles on property; makes wine, preserves and olive oil; and keeps bees that produce honey for legendary singer Andrea Bocelli, who resides on the neighboring estate. A family that pitches in to get anything that is needed, done when it is needed (like driving a guest whose luggage didn’t show up into the nearest town to buy clothing, putting up extra tarps during torrential downpours, rearranging tables over and over, tending bar, showing guests how to turn the heat on in their rooms, etc.) A lot like event managers, when it comes down to it.

Conference sessions were interspersed with a daily choice of short, fun experiences provided by Diacceroni — the aforementioned truffle hunting, pasta and pizza making classes, wine tasting, olive oil pressing demonstration, and beekeeping. And all the meals were prepared fresh on-site by Chef Francesca Bertini and her team, who took particular care to make sure that everyone who had food allergies or sensitivities had something they could safely eat.

As long-time event industry professionals, the Haute Dokimazo team was cognizant of what people need, and what they want for a long travel day. Everyone was sent a new Amazon Kindle Fire before the trip to provide entertainment options for a long flight. We were given AKALO vitamin patches (to keep everyone healthy and help prevent potential hangovers); Bioreigns CBD Oil-free water complex to help with sleep; compression socks courtesy of fellow participant Dave Stevens/Alation; and a goodie bag with a power bank, travel adapter, snacks and more to help with the 12+ hour journey.

There were bags and water bottles and luggage tags courtesy of SixTwentySix. Each seat on the plane had a copy of the special Haute Life in-flight magazine, which was also a directory of participants. Colorful blankets and eyemasks were distributed to anyone who wanted them. We received room drops with slippers, lip balm and an easily-portable bag from Masterpiece. And on the return trip, we were each given a Passion Planner to help us keep the momentum going.

The entire event format was designed to make networking easy. How could you not strike up a conversation at lunch, on a shuttle bus, or when slogging through mud hunting for truffles?

As a direct result of this event, business partnerships have been formed. Deals are being done. And friendships were formed that will last a lifetime.

Plans for the next SFR are already underway and the Haute Dokimazo team says they plan to reinvent the event. It won’t just be in a different destination, it will be a completely new experience. Let the disruption through humanity continue!

Many of the attendees have written about their experiences and the impact that the event has had on them, personally and professionally. Here’s a short list: