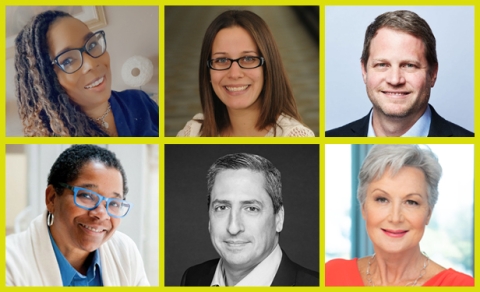 While the meetings and events industry tends to slow down a bit during the sultry summer months, that hasn’t stopped event-related organizations from welcoming established industry professionals to their teams while rewarding hard-working staff with elevated titles and responsibilities. Take a look!

Before joining Spiro, Kuznick held executive roles at MC2 as COO and at FoodPrep Solutions, where he served as COO and board director. With his extensive executive leadership experience, integrating and running global agencies within the industry, combined with his time spent as a partner at Deloitte, Kuznick brings a diverse set of skills and expertise to the Spiro team.

Visit Albuquerque has welcomed 20-year association leadership veteran Scott Craighead as its new vice president of sales, services and sports, effective Aug. 22. Craighead comes to Albuquerque most recently from the International Association of Exhibitions and Events (IAEE), where he served as vice president of exhibitions and events as well as the vice president for the Center for Exhibition Industry Research (CEIR). He brings extensive experience working with destination marketing organizations and has implemented many event- and marketplace-related initiatives.

In his new role at Visit Albuquerque, Craighead will oversee the sales, services and sports Division, responsible for generating qualified meeting, convention, sports and group tour leads that are distributed to Albuquerque’s hotels, the Albuquerque Convention Center and area event and sports facilities.

As part of his 14-year career with IAEE, Craighead was responsible for budgeting, show development and design, technology solutions, personnel, contracts and overall logistics for IAEE’s Annual Meeting & Exhibition Expo! Expo! and other IAEE-produced events. He previously handled logistics and exhibit sales for Global Semiconductor Alliance events and exhibitions held in the U.S., Europe and Asia.

Visit KC, the chief hospitality sales and marketing organization for the Kansas City region, has welcomed 13-year hospitality and sales professional Kathryn “Kat” Taylor as national account manager. Working within the organization’s convention sales team, she will be based in and responsible for the Washington, D.C., market.

Taylor comes to Visit KC after more than eight years with Visit Baltimore, most recently serving as a senior national sales manager for the Midwest territory, a role in which she worked collaboratively with the Baltimore Convention Center and the hotel community to secure meetings with significant impact for her community. Prior to Visit Baltimore, Taylor spent five years with Hyatt Hotels.

The Vinoy Renaissance St. Petersburg Resort & Golf Club has tapped Vanessa Williams as its new general manager, tasked with overseeing the strategic vision and all operational departments of the luxury property in downtown St. Petersburg, Fla.

A South African native, Williams brings more than three decades of experience in luxury hotel sales and operations management, with past leadership roles at the Raffles L’Ermitage Beverly Hills, Sukhothai Bangkok, Waldorf Astoria Beijing and Conrad Seoul. Most recently, Williams oversaw the flagship Waldorf Astoria Beverly Hills as its general manager, where she led her team to outperform luxury benchmarks, including upholding the Forbes 5-Star rating for both the hotel and the spa.

William joins The Vinoy’s executive team ahead of major renovations at the property that are slated to be completed next year and will play a key role in leading the resort into a new era. Experienced in community development, she previously served on the Board of the Beverly Hills Conference & Visitors Bureau.

Following a nationwide search, the Philadelphia Convention and Visitors Bureau (PHLCVB) has appointed DEI advocacy expert Sheila Alexander-Reid executive director of PHL Diversity, a key business development division of the PHLCVB. A champion for marginalized communities who brings decades of leadership experience in diversity, equity and inclusion, she will oversee PHL Diversity’s efforts to promote the city as an inclusive, welcoming destination for meetings and conventions.

In her new role, which begins Sept. 7, Alexander-Reid will lead implementation and strategy to develop and synergize relationships with industry and government stakeholders across Philadelphia’s diverse community. She will lead PHL Diversity with the goal of increasing the net convention, meetings and tourism brand value of Philadelphia while also advancing opportunities for growth of local businesses as a result of increased event and visitation to the city.

Most recently, Alexander-Reid served as senior vice president, business development at BiasSync, a firm that helps organizations more effectively assess and manage unconscious bias in the work environment. She also founded two agencies of which she remains active, Branding4Change, a boutique branding and training agency focused on DEI, and Women in the Life, a social justice non-profit organization that creates safe spaces and social gatherings for lesbians of color.

In 2015, Alexander-Reid was appointed by Washington, D.C. Mayor Muriel Bowser as executive director of the Mayor’s Office of Lesbian, Gay, Bisexual, Transgender and Questioning Affairs, a role in which she advised the mayor on the implementation of discrimination protections and diversity and inclusion policies that supported D.C.’s LGBTQ residents. Along with being instrumental in the city’s successful fight for marriage equality, she also served on a policy committee advising the Biden-Harris campaign and often collaborated with Destination DC to help attract diverse conventions.

Global experiential marketing agency Impact XM has appointed Marty Park vice president of international business development. With 27 years of experience in developing and managing international exhibits and events, he will play an instrumental role in continuing to expand the agency’s reach, continuing to form deep connections with the company’s present clients and driving forward new opportunities, particularly in the Korean market.

Park brings a vast portfolio of international work and deep expertise in supporting some of the world’s most well-known brands in developing custom-made events, exhibits and experiences. Prior to Impact XM, he drove Korean business for a Boston-based brand experience agency as vice president, Korean customer services, working with clients such as LG, Kia and Hyundai for 11 years. Park also spent 11 years at an exhibition stand builder and interior finisher in Germany, developing his repertoire of international business and communications efforts.

Have some people news to share? Please send announcements and high-resolution headshots to lpsavas@tsnn.com.