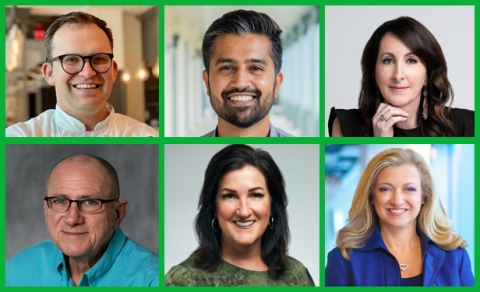 Despite rumblings of a slowing job market, the events industry is continuing its robust hiring and promoting momentum, with organizations far and wide filling executive roles with seasoned industry veterans and elevating strong-performing team members to new positions. Check them out!

Caesars Entertainment, Inc. has promoted 20-year sales and hospitality industry veteran Kelly Gleeson Smith to vice president of sales, meetings and events, responsible for leading the global sales strategy for meetings and events for the enterprise and overseeing a team of more than 120 sales executives.

Based in Florida, Gleeson Smith joined Caesars Entertainment in 2017, and in her previous role at the company, led the East Coast sales team and its efforts. She is actively involved with the American Society of Association Executives (ASAE) and was recently named to the Industry Partner Alliance board.

Dena Lowery has been promoted to president of Opus Agency. Over a career spanning more than 26 years with the agency, she has proven herself as a leader in global experience and event operations. She is replacing Kim Kopetz, who has been appointed president and COO of The Opus Group, who will oversee day-to-day operations across the collective’s brands.

Beginning her career at Opus Agency in 1996, Lowery has served in a range of roles, starting as an event manager, followed by director of client services and then as executive vice president, events division. Most recently, as COO, she has been overseeing the agency’s event operations, registration, attendee management and the international capabilities.

Lowery currently serves on the boards of AVIXA and MGM Resorts International.

Bringing four decades of industry expertise to his new role, Mackenzie most recently served as executive vice president at Ungerboeck following its recent merger with EventBooking, where he served as president. Prior to that, he held leadership roles in event tech companies including Oracle (Micros-Fidelio) and Aventri (etouches).

The Philadelphia Convention and Visitors Bureau (PHLCVB) has appointed Karen Dougherty Buchholz as the new chair of its board of directors. She will succeed 18-year PHLCVB chair Nicholas DeBenedictis, chairman emeritus of Aqua America.

Buchholz currently serves as executive vice president of administration for Philadelphia-based Comcast Corporation, where she has worked for more than 20 years and has held several positions. Early in her career with Comcast, she founded the organization’s first corporate communications infrastructure, unifying communications for the company’s family of companies, and was also responsible for the development of both corporate headquarters: the Comcast Center and neighboring Technology Center.

Prior to joining Comcast Corporation, Buchholz was president of Philadelphia 2000, the organization that secured Philadelphia as host city for the 2000 Republican National Convention and served as the city’s official host committee.

As executive chef, Krueger will collaborate with Chef Acheson to oversee all aspects of food and beverage operations across the hotel’s four restaurant outlets and in-room dining. In his new role, he will supervise the culinary team, manage budgets, maintain the overall guest experience and work closely with the hotel’s sommelier and wine director, as well as its lead mixologist. He’ll also work closely with local farmers and vendors to ensure the hotel restaurants continue to serve farm fresh and sustainable ingredients whenever possible.

A 15-year veteran of the hospitality industry, Krueger has worked in kitchens at prestigious luxury resorts across the U.S. including J&G Grill at the St. Regis Deer Valley in Park City, The Lodge at Sea Island Resort in Georgia and Homestead Resort in Utah.

Leading venue management and event strategy company ASM Global has tapped a new executive and announced a major promotion at one of its partner venues.

On Oct. 13, the company announced it had appointed convention industry veteran Kimberly Weedmark as the new general manager for the Los Angeles Convention Center (LACC), part of the ASM Global venue portfolio for the past nine years.

Bringing a wealth of experience to the downtown L.A. venue, Weedmark has worked in the city’s convention industry for more than two decades. For the past 20 years, she has led high-performing sales teams in all aspects of sales, event management and customer/partner relations at NBC, Universal Studios Hollywood, most recently as vice president of special events and group sales since 2008. She was also involved in managing partnership relations with the Los Angeles Tourism & Convention Board, hotels, tour operators and others to support business development.

In her new role, Weedmark will work closely with the City of Los Angeles to grow and modernize the LACC.

Thornton brings many years of business development leadership experience to his new position, most recently serving as executive vice president development at Live Nation Entertainment for more than five years.

The company also promoted 12-year hospitality veteran Austin Connors to general manager of the Abilene Convention Center in Texas. Connors has been part of the ASM Global team for seven years, most recently serving as senior events manager at the Pennsylvania Convention Center in Philadelphia.

Connors previously served as event manager for the Tucson Convention Center complex, which includes the Tucson Arena and two performing arts theaters, the Linda Ronstadt Music Hall and the Leo Rich Theater. He received a Master of Science in hospitality management from Temple University School of Sports, Tourism and Hospitality Management in May of this year.

The Myrtle Beach Area Chamber of Commerce (MBACC) and Convention and Visitors Bureau (CVB) in South Carolina has promoted John Cramer to facilities manager. In his new role, Cramer will work with Diana Greene, MBACC chief of administration, to manage the operation of chamber offices and facilities, including maintaining the storage warehouse, visitor centers, mailroom, equipment and supplies. He has been with the chamber for seven years, serving as the facilities assistant manager.

Originally from Gorakhpur, India, Pandey attended Le Cordon Bleu in Paris, where he studied under Michelin Star-winning chefs and received a Bachelor’s Degree in Hospitality Management in 2015.

Pandey began his professional culinary career as a management trainee and cook at the Constance Ephelia Resort in Mahé, the largest island of the Seychelles. During his time at the resort, he was quickly promoted to demi chef de partie, a role in which he helped lead the resort’s kitchen staff and daily operations.

In 2017, Pandey moved to the U.S., where he accepted a position as chef de partie at La Contera Resort in San Antonio, and since then, has held leadership culinary roles at Texas-based resorts hotels and resorts including the Sheraton Gunter Hotel and Horseshoe Bay Resort.

Have some event-related people news to share? Please send announcements and high-resolution headshots to lpsavas@tsnn.com.